The Future of the Eagles

The Philadelphia Eagles are not quite eliminated from the playoff race entirely, but they may actually be better off on the outside looking in this season. Should they take their extremely slim chances and push towards a miraculous playoff run, or should they be content with an earlier draft pick and select a top collegiate prospect? 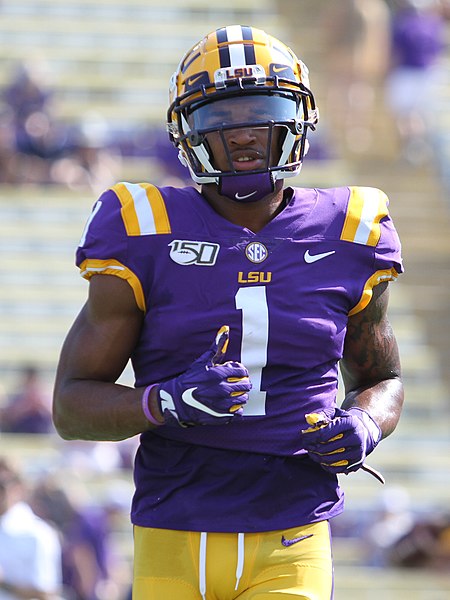 Louisiana State’s explosive, dynamic wide receiver Ja’Marr Chase, who opted out of his junior season to prepare for the draft, could be the Eagles’ compensation for a season otherwise full of negatives. | Photo courtesy of Wiki Commons

Before the season, the Philadelphia Eagles, or the Birds, were poised for their fourth straight playoff berth and ready to contend for the Super Bowl, with fifth-year quarterback Carson Wentz ready to silence the doubters and tap into the Most Valuable Player (MVP) caliber potential he has flashed throughout his career. Sources like ESPN and NFL Network projected a double-digit win total for the Birds this season. Instead, they have turned in a sub-.500 winning percentage and have even struggled to win games within the National Football Conference (NFC) East, the league’s weakest division. Wentz’s poor performance is widely considered one of the primary causes of the team’s struggles. Through twelve starts, he could only help the offense put up enough points for a victory on three occasions. Following a 30-16 defeat at the hands of the Green Bay Packers, they pulled off a 24-21 upset win against the New Orleans Saints (who had an .833 winning percentage entering the game). Wentz’s replacement, rookie quarterback Jalen Hurts, repeatedly led the offense downfield against a defensive unit that had allowed an average of just nine points in their previous five games. Hurts, who completed seventeen of his thirty passes for 167 yards and a touchdown, also made an impact with his legs, adding 106 rushing yards on eighteen carries. Second-year star running back Miles Sanders also ran wild, totaling 115 yards on only fourteen carries after breaking away for an 82-yard touchdown and adding another score on a one-yard plunge late in the game. Even with this monumental victory, the Eagles find themselves sitting in third place in the NFC East, behind the 6-7 Washington Football Team and the 5-8 New York Giants. Although they are both within the Eagles’ reach, both teams are playing quality football: Washington has won four straight games and the Giants are coming off their first loss in five games.

The Eagles now have two paths they can follow. They can either continue to compete for the division and hope that they can beat out Washington for the NFC East title, or they can start to lose on purpose, effectively “tanking” the team, and draft a top college prospect at a position of need, like wide receiver, offensive line, or linebacker. Currently, winning the division seems the more difficult feat to accomplish. Although Washington has the hardest remaining schedule, the Eagles would need to win two more games than Washington the rest of the season, including the matchup between the two teams in the season finale. This outcome does not seem likely; according to the New York Times, Philadelphia only has an eleven percent chance to make the postseason heading into their week fifteen matchup with the Arizona Cardinals.

The more realistic and better outcome for the future of the organization would entail “tanking” for a higher draft slot. The Eagles are currently in position to pick ninth overall in the 2021 draft. If they go 1-2 to finish out the year, they could climb as high as the fourth selection and likely no lower than their current position. With a top-ten choice, the Eagles could draft a high end offensive lineman to add depth to a position that desperately needs help. They could also draft a linebacker, which has been an area of concern for multiple years now. Yet another option, and a popular one within the fan base, is LSU wideout Ja’Marr Chase, a current junior clocking in at six foot, weighing 208 pounds. Chase could be taken within the top five, according to CBS Sports. Regardless of the result of the rest of the season, changes are likely to come for the franchise, from players to coaches and potentially even general manager.