Blunders of the School Board

As if the last several months haven't been chaotic enough, LMSD is adding to the mayhem with the bizarre switches between virtual and hybrid schedules. Not only does this confound both students and teachers, but also raises the risks for unnecessary and avoidable COVID-19 transmission. It's time to stop this nonsense! 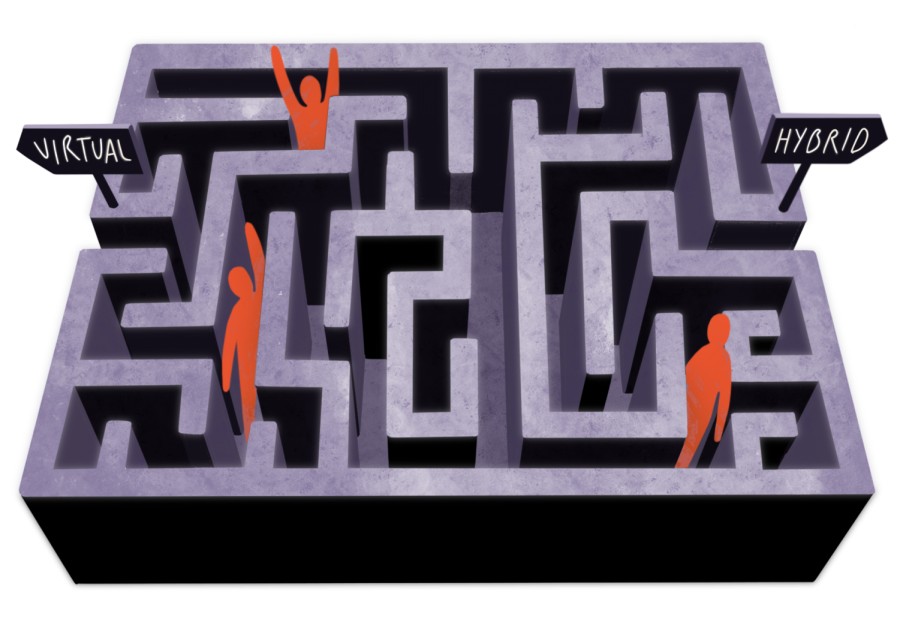 Back and forth. Virtual to hybrid. LM’s students struggle to keep up with the exasperating schedule changes imposed upon us week after week as the district navigates the uncharted territory that is COVID-19. On October 19, high school students were formally permitted to re-enter the school in an organized fashion for the first time since its initial closure in March. Split into various cohorts, we followed a methodical schedule with only half of the students present on any given in-person day. While the maroon cohort excitedly arrived on campus that tumultuous morning, many wondered how long this in-person education would really last amidst the imminent rise in cases.

Considering that on October 19 new cases of coronavirus only continued to climb, with 1,670 new cases reported on that day alone in Pennsylvania, why did LMSD decide to open its doors then? The district did anticipate the spike in cases in April and May, when the number of new cases was about 1,900 per day, a number not so different from that of October 19. The district sought to appease the student body as well as their parents and guardians. Those students experienced the consequences of utilizing a laptop at all hours of the day in order to complete classes and schoolwork, so of course the first attempt to remedy this excessive screen time would be to physically go back to school. The school board was forced to make a decision: allow the students to come back, implementing all of the safety protocols possible as case numbers soared, or resist the student backlash that would arise from maintaining this virtual schedule.

This daily routine of logging into classes at 9 a.m. with thirty minute breaks seemed viable and quite possibly better than the grueling 7:30 wakeup time with five minute breaks to scramble between classrooms. However, in terms of learning and being able to absorb material, the topic of whether students perform better while in-person or online remains controversial and quite subjective. On one hand, allotting more time for sleep and overall work appears to benefit students academically, but following this schedule online provides a strenuous aspect to learning that has gone unexplored by high school students and staff until this past year. Though students should theoretically feel more engrossed in their studies and lectures because of this new free time, having these teenagers sit alone with no physical pressure of the academic environment around them doesn’t maintain the integrity of teaching methods that would otherwise be captivating. Allowing students to attend classes in-person while present in front of their teachers bestows a contrasting, perhaps more engaging, school experience. It reintroduces the stress instituted by physical demands as well as harsher deadlines. Though hybrid may issue more efficient and proper methods of learning, having students frequently switching from this to their virtual schedule has detrimental implications. Because of this, the school board must be able to impart even the slightest of stability during the pandemic to coincide with their previous decisions regarding the spread of this disease.

Those on the school board received the most backlash regarding their decision to keep LM open despite having CHOP’s PolicyLab depict the circumstances as “quickly becoming catastrophic” and strongly suggesting that schools immediately revert back to their familiar virtual schedule. Because of the some 7,000 daily cases reported in November, it was recommended that schools nationwide close, but LM kept their schools open in spite of this. Then on December 7, LM decided to open once again for its hybrid students to participate on campus with new cases in Pennsylvania nearing 10,000 a day.

It was much more harmful to take this course of action not only because of the obvious damage COVID-19 would have generated, but also because of the quick turnaround required from teachers and students. Though it was understood that the district would inevitably need to return to the virtual model of learning, having this additional unknown factor induced unnecessary stress. It should be evident that when there is a severe increase in cases and deaths that schools should consider closing, even if in-person learning may supply proper, standard learning. Objectively, it was much more dangerous to attend classes during these sporadic hybrid days and much more tense being aware that, at any moment, school could close for weeks on end at the announcement of one email. It is also arguably extremely difficult to be able to entirely predict the safety of students, but following the basic trends that the virus has established, remaining in the virtual classroom would have been more secure at least for the months of November and December. When the school district is able to sustain and adhere to one schedule for longer than a few weeks at a time, it puts both the students and teachers at ease and accommodates for a healthy, much needed routine during these “unprecedented times.”