Music that meets the moment

In the pandemic, many of turned to music as a source of escapism. But Munis argues that may not be the right fit for these times. She argues why pop music's foundation is not adequate for the times we're in. 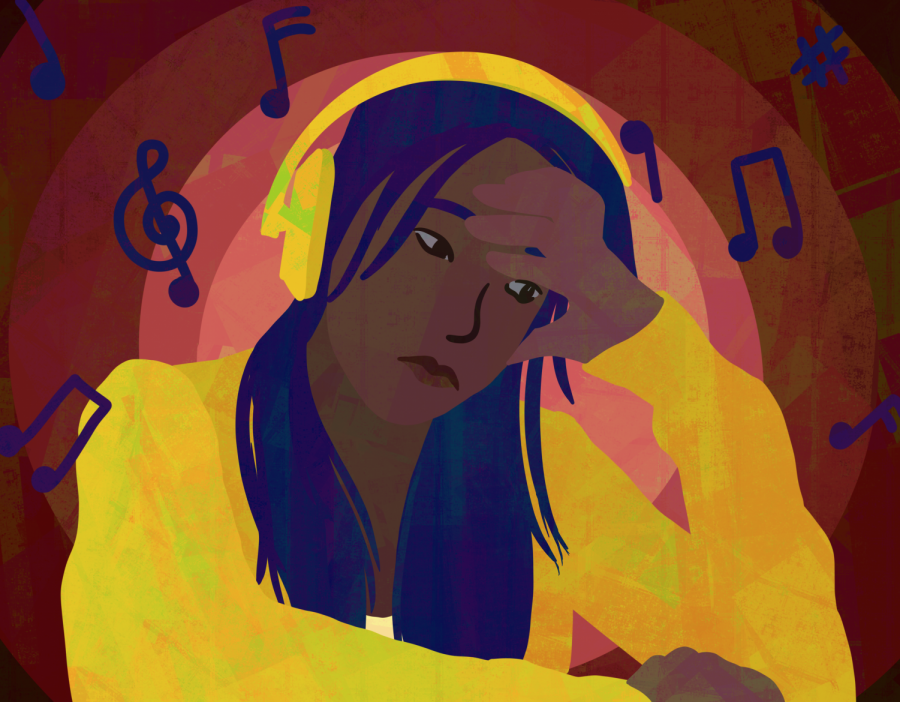 As we reach a year into this pandemic, I find myself reflecting on how I have been spending my time in this interim. Time, or should I say progress, seems to have stopped. In this in-between, this interlude in our lives, I have spent the overwhelming majority of my free time listening to music. Like every good audiophile, this was partially for me to process the new world we face and to block out that nagging sense of doom this moment presents.

Back in March, when I naïvely believed everything would all be swiftly over by June, I found myself trying to keep my stamina up for spring of junior year by pumping light-hearted, upbeat, escapist music. This pandemic was a hiccup, a minor deterrent from normal life. That ruse soon fell apart.

By April, I began sliding down a particularly dismal corner of my music library. My asynchronous instruction time was filled with the haunting orchestration of Tamino’s “Amir” and the cheekless earnestness of Damien Jurado’s “The Shape of a Storm,” these perhaps represent the more obscure parts of music listened to by teenagers, but they nonetheless met the moment. With 30,000 new COVID-19 cases every day, this was not going away, and the anger, hopelessness, and fear that these albums confront made me feel seen in a way that was necessary when I could not be around others.

Like most pandemic hobbies, I got bored of listening to the same five albums and two playlists over and over again. Guided by my Spotify algorithm, I was led to a surprising destination: newly released pop music. Over the months, Taylor Swift, Dua Lipa, Doja Cat, and Justin Bieber were all suggested to placate my cabin fever. Dua Lipa reminded us that moonlight and starlight existed after days inside; Olivia Rodrigo made millions scream “red lights and stop signs,” which refreshed my driving skills after weeks without going anywhere. In the fall, I took the underwhelming risk of listening to Shawn Mendes’s “Wonder,” which accosted me with lines such as “I wonder, wouldn’t it be nice/To live inside a world that isn’t black and white?” Perhaps this was Mendes’s attempt at topical commentary, but falls exceedingly short, like most of his following album, of depth. I could go on but alas, I refuse to torture myself with recalling the many examples of four-chord detritus that were released in the past year.

Soon, I found myself returning to old favorites. The chaos and angst of “Helter Skelter” matched my restlessness throughout the long summer. Mixed with the breeziness of “Savoy Truffle,” the cooing of McCartney’s “Mother Nature’s Son” softened the pang of the death counts rising, the news of sick friends, and passed relatives. I spent hours totaling days listening to Joni Mitchell’s “Blue;” I thought about the album so much that I ended up writing multiple college essays on it. The steadfastness of songs known, sung, and enjoyed before when one’s milieu wasn’t Zoom squares provided the hope needed to continue. I return to these on the days when I wake up in disbelief with the situation we find ourselves in.

This is not to say that the pandemic did not create an immense library of beautiful, poignant music that expressed what now feels like. Bahamas’ “Sad Hunk” encapsulates what it means to be forced into a virtual existence without alternatives; although mostly produced before the pandemic, the clairvoyant “Fetch The Boltcutters” by Fiona Apple provides the ample prompting for the ubiquitous reflection all this time has given us; Moses Sumney’s “græ” is unapologetically eccentric, a necessary form of novelty that can be enjoyed indoors. This independent music evades music label interests and the pursuit of attracting a growing fanbase, leaving room for interpretation and space for each listener to personally connect.

Pop music simply cannot meet this moment in the way we need it to. The sanguine everything’s-coming-up-roses mentality that most pop music encourages is not fit for a pandemic and isolation. Likewise, a feckless, Swiftian attempt at an indie album dashed with unsophisticated, acoustic melodies and undercurrents of bedroom pop – a pop album in disguise, really – is not an apt reflection of this novel experience and the fear that novelty creates. Swift brings nothing new to the table; she simply introduces her audience to This music of a time before, a time far removed from our current reality, promotes unhealthy escapism, a response that is perhaps reflective of the doubt and flippancy of the United States’ early COVID-19 response or a sign of potential for a reckless future as precautions are eased with widespread vaccinations. We need truth and reality to get through this crisis, and what we listen to matters in our efforts to push ourselves forward.