So what now? An appeal to white “allies”

After spending months protesting racial injustice, many in America have decided to simply move on. If this movement is to accomplish more than moral satisfaction, action must be taken. 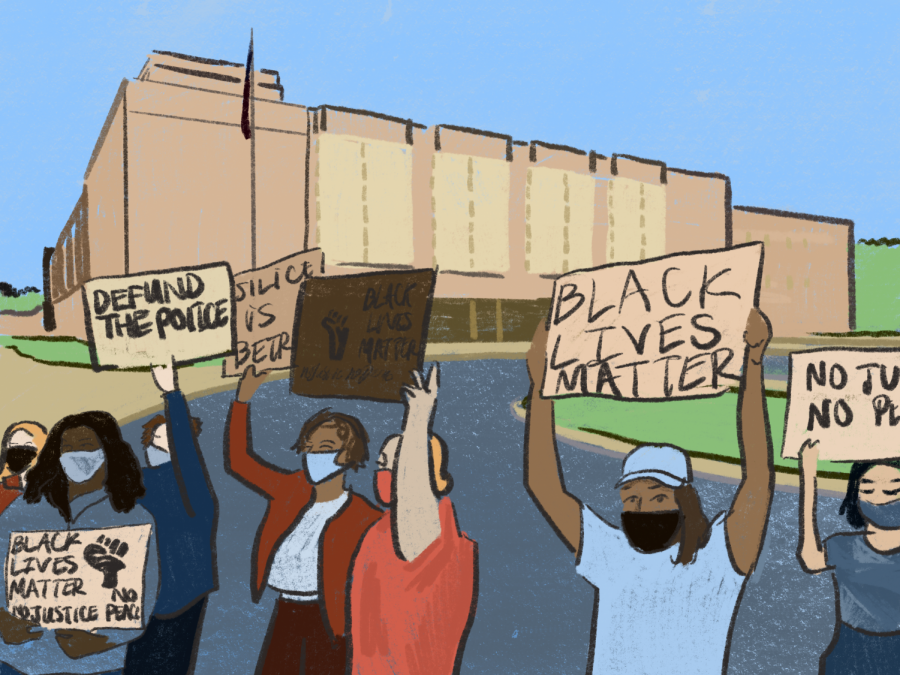 Students have been a leading voice in calls for racial justice. | Graphic by

The trial of the decade is over. Derek Chauvin has been convicted of second-degree unintentional murder, third-degree murder and second-degree manslaughter. The riotous Antifa has seemingly been satiated as demonstrated by a decline in the size and scale of protests as compared to last summer. Life, by most metrics, is appearing to go back to normal—right?

Our hard work of putting BLM in our bios and posting graphic videos of Black men being brutalized by police has paid off. The murderer, whose crime was documented on video and corroborated by medical experts, retired police, ex-military, and the president, faced a highly contentious trial. George Floyd was afforded so much justice that the National Guard prepped for weeks in anticipation of the verdict and the potential blowback against it. Just days after, establishment Dems continue weaponizing his death to push lukewarm reformist policy to satisfy white liberals. House Speaker Nancy Pelosi, in a statement to the Congressional Black Caucus, thanked Floyd for “sacrificing your life for justice.” He didn’t sacrifice his life Nancy, it was taken.

The more important question to ask, however, is did he get justice? With that I pose another question: doesn’t it feel like we’ve forgotten someone? You posted her name in Instagram captions for your vacation photos. We commodified her in every possible sense: her name, her face, her hopes and dreams, her words. Breonna Taylor, the 26 year old EMT killed by police over a year ago, has yet to receive the “justice” Mr. Floyd purportedly did. Bills have been proposed in her name, such as the Justice for Breonna Taylor Act and the Breonna Taylor Law in Kentucky, but as of right now, not a single one of her killers or their complicit co-workers face criminal charges. A quick Amazon search leads to Breonna Taylor T-shirts, mugs, stickers, Croc charms, baby onesies, and phone cases. Surprising absolutely no one, white Americans have once again found ourselves capitalizing off of Black pain. What’s new? Though she was just as vulnerable and human as you and I, even in death, Black lives are treated as expendable. Most recently, as the Minneapolis community faced Chauvin’s verdict, another young man was killed. Daunte Wright, a twenty-year-old, died at the hands of police on April 11. Nine days later, it was Ma’Khia Bryant who was shot at nearly point blank range in the street; she was only a couple months older than me.

Now you may be wondering about why I’m bothering to put this forward in the first place anyway. I’m just a kid. I can’t vote in elections, let alone donate large sums of money to support venerable causes. Signing petitions and posting infographics is about the extent of my influence right now. And that’s where I tell you: no. This pervasive and continuous feeling of helplessness, the one that resurfaces every time another instance of brutality and injustice occurs, is intentional. It is what makes adults dread youthful ambition for notions of a more equitable future. It is behind every recycled grievance of “cancel culture” strawmanned by conservative pundits. And above all, it is what keeps us complacent in the systems that cyclically and perpetually ostracize and oppress Black people in America; and until we are able to confront the economic institutions that fuel this apathy and performativity-to-burnout pipeline, we cannot even begin to understand anti-Black racism in America.

So what can we do? The first step is pretty straightforward: listen. Listen to whoever and whatever you can about the historical causes and modern-day implications of racism in America. Listen to music written and composed by Black artists about the Black experience. Look into critical race theory and anti-racist text. These actions are far from being enough, as nothing ever will be; but it is something to start. Volunteer with mutual aid organizations like Mutual Aid Philly and Philly Socialists. Put in the work and commit yourself to anti-racism, or get out of the way. Black liberation movements don’t need any more self-proclaimed “allies” who refuse to put in the serious work required. Secondly, utilize your privilege to make white people uncomfortable. No movement has ever gotten anywhere by being palatable. Stop watering down terminology like “ACAB” and “defund the police” — they mean exactly as they sound. Cut off friends who espouse racist beliefs, not just slurs and hate speech. Talk to your family members: your siblings, your cousins, your grandparents. We as white people carry a certain level of undeserved entitlement to take up space in our classrooms, so when you can, use it. And most importantly, recognize that in the end, no matter how much work you do, you are not the center of these movements. You are still the oppressor. Black people do not owe you any sort of treatment or respect for it, and those certainly shouldn’t be your intentions going into this work. You cannot call yourself an ally and simply will it into existence; this isn’t gentrified Tiktok spirituality. Your actions speak infinitely louder than your IG bio. It is with this, with valuable contributions that actually have impacts, that white people can help.